Making Sense of Industrial Networks: Fieldbus and -20mA in the Age of IoT

This installment in our series on key industrial network technologies explains why fieldbus and 4-20mA communications remain relevant despite the proliferation of Ethernet-based communications amid industry’s digital transformation.

What will be the fate of fieldbus and 4-20mA network communications in the face of Ethernet’s growing use in industrial networking? This is a question that many are asking as industrial Ethernet rapidly replaces legacy technologies that once dominated industrial networks.

In the discrete manufacturing industries, for example, the transition from fieldbus to industrial Ethernet is well underway. “It has been occurring rapidly over the last decade and doesn’t appear to be slowing,” reports Michael Bowne, executive director, PI North America (the organization supporting Profibus and Profinet).

As evidence for his point about the increasing use of Ethernet, Bowne notes the annual node counts that PI conducts for Profinet and Profibus devices used in factory automation. “There were 8.5 million Profinet (industrial Ethernet) devices installed in 2021—the largest annual figure yet,” he says. By contrast, 1.5 million Profibus (fieldbus) devices were installed. This amounts to nearly six Profinet devices installed for every one Profibus device.

It wasn’t all that long ago when the opposite was true. “2016 was the first year more Profinet devices were installed than Profibus,” notes Bowne. “In 2007, one Profinet device was sold for every 15 Profibus devices.”

Despite such advances in discrete manufacturing, the transition to Ethernet has been unfolding much more slowly in the process industries. Bowne reports that there the transition from fieldbus and 4-20mA to industrial Ethernet is really just getting started.

A big reason for the slow start has been safety, a concern eased recently by the development of Ethernet-APL (advanced physical layer), a version of Ethernet designed for hazardous environments. “With Ethernet-APL, there is now an intrinsically safe physical layer for Ethernet to allow direct connection to instruments in potentially explosive areas,” explains Bowne. “Ethernet-APL is poised to be a significant step change in the capabilities of process automation networks—a change that is long past due.”

Ethernet-APL is an extension of the specification for single-pair Ethernet (SPE) based on 10BASET-1L. Not only does it support all Ethernet-based protocols, it also provides power and communications over IEC 61158-2 Type A cables that can be as long as 1,000 meters. For intrinsic ignition protection, Ethernet-APL devices follow electrical parameters defined in IEC TS 60079- 47, the two-wire intrinsically safe Ethernet (2-WISE) technical specification.

Users in both the discrete and process industries, therefore, are able to benefit from the greater speed and bandwidth offered by industrial Ethernet. This greater speed and capacity can streamline both connectivity and the fl ow of ever more diagnostic and prognostic data. “When leveraged properly, this additional information can net significant gains in throughput, quality, and cost reduction,” notes Steve Fales, director of marketing at the ODVA (the group supporting EtherNet/IP, DeviceNet, and the Common Industrial Protocol).

For these reasons, Fales and others see fieldbus and 4-20mA communications giving way to industrial Ethernet in most new installations. “The scales will generally tip toward industrial Ethernet for a new discrete manufacturing line or an island of automation in a process facility,” says Fales.

Replaced, but not erased
Does this mean that Ethernet devices will eventually replace fieldbus and 4-20mA networks? “Yes, but it will take a while for suppliers and end users to synchronize the replacement of the existing technology because the installed base is so large,” predicts Tom Burke, director of global standards at the CC-Link Partner Association Americas. “There has been a lot of investment [in these legacy technologies], so there has to be a significant return on investment to justify replacing it.”

“Even though the cost difference between legacy and new technologies is nominal, it’s hard to justify ripping and replacing existing industrial automation devices,” adds Fales. Buying new devices to replace existing ones that are doing the job and then shutting down production long enough to make the switch doesn’t make a lot of economic sense, especially when capital budgets are limited.

In the process industries, another limiting factor is the newness of Ethernet-APL. Some time will need to pass before enough device manufacturers incorporate the new Ethernet-APL physical layer into their products. “A significant number of vendors must do this to create an ecosystem of products that allow end users to build plants and networks,” explains Bowne.

Another lifeline for fieldbus and 4-20mA communications has been the development of gateways and translators capable of sending data to Ethernet networks. These devices allow data to be extracted from legacy networks while enabling those data to be sent to the edge or the cloud for monitoring and analysis. “They help keep existing installations integrated into the broader control network and thereby enable these legacy networks to stay in service as long as vendors are willing to make spares for the devices,” says Fales.

Offner at Phoenix Contact thinks that automation vendors will continue supporting fieldbus and 4-20mA technology with spares and services for quite a while yet. “We still have applications using pneumatics that were replaced by the 4-20mA loop circuits made with transistors,” he notes.

Unleashing stranded data
Ironically, the evolution of automation technology could help extend the life of fieldbus and 4-20mA technologies. “They [legacy networks] will still find use as newer digital devices using Ethernet include their capability,” predicts Offner.

For such reasons, Ted Masters, president and CEO of the FieldComm Group, thinks that traditional fieldbus and 4-20mA will always have a place in industrial networks. “Even in this era of digitalization, end users are not ripping out field devices,” he says. “They are instead protecting their investments by finding ways to unleash the valuable data stranded within these devices.”

For Masters, the challenge is to do this in ways that support digitalization. Besides using gateways and translators, another method involves upgrading 4-20mA signals with the HART protocol. “Higher- speed digital approaches to access 4-20mA data can use technologies such as HART-IP and WirelessHART,” says Masters.

Because the HART protocol can be superimposed on existing 4-20mA wiring, no changes to the connectivity infrastructure are necessary. Moreover, many instruments and host systems already support HART natively, and those that don’t can add HART functionality with adapters and other devices. “This makes it easier and more cost-effective to bridge this data to applications that are either on-premises or cloud-based to create value,” notes Masters.

Another way to help fieldbus and 4-20mA technology support digitalization is to simplify the integration of field devices. Because industrial networks continue to include a variety of physical layers addressing Ethernet as well as fieldbus and 4-20mA wiring, the FieldComm Group is collaborating with the FDT Group, PI, and the OPC Foundation to develop new field-device integration (FDI) technology.

FDI provides a common approach for integrating information from intelligent field devices into higher-level asset management and automation/ control systems for configuration, commissioning, diagnostics, calibration, and other tasks. To be open for use across different protocols and network types, it also includes part of the NAMUR Open Architecture model and supports new and existing automation protocols. “FDI technology has been a major milestone for simplifying access to field device data in a standard way, regardless of communication protocol,” notes Masters. 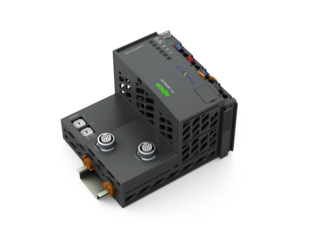 The Wago 750-366 EtherNet/IP fieldbus coupler detects all connected I/O modules and creates a local process image. Two Etherent interfaces and an integrated switch allow the fieldbus to be wired in a line topology, eliminating the need for additional network devices, such as switches or hubs. Source: WagoBest fit for the job
Another reason that fieldbus and 4-20mA communications will continue to be relevant for a long time to come is that they remain sufficient for some jobs. One example is a simple weigh scale reporting only weight through fieldbus. In such cases, Ethernet’s ability to accommodate communications from multiple devices on one wire is unnecessary. “Simple point-to-point connections are more than sufficient,” notes Burke. “They provide enough bandwidth for the devices to work.”

Typically, users wanting to extract more information from plant floor devices will send data to a PLC and store it in memory. In this way, the “PLC serves as a kind of data federation because it aggregates data from all these different devices,” says Burke.

Open standards have also helped with transferring fieldbus data to higher-level applications in the network. “In 1995, OPC basically solved the problem of being able to grab data from all these different devices and send it up to client applications, such as typical small-scale HMI systems or even Microsoft Excel,” explains Burke. User companies and industry consortia have since developed data models and naming conventions to access the data from the disparate devices on the network.

Such point-to-point architectures provide many manufacturing facilities the connectivity they need. “Therefore, as long as they can aggregate the data and plug into something to get the data out, they don’t see any significant value in replacing their current network,” says Burke.

In fact, many of these facilities, especially the smaller ones, are wary of pursuing technologies driving digital transformation. One reason is that they don’t know how to assess the value of turning data into actionable information to justify retooling their existing installations. Another reason is that they often don’t have the technical expertise and understanding in-house. “Over time, though, people will start to understand the benefits of using [greater levels of ] information and leveraging historians in a lot of these small manufacturing installations,” says Burke.

Beyond these reasons, there are at least two kinds of use cases that will continue to favor fieldbus and 4-20mA communications. First is when the job requires a specific device that isn’t yet available with an industrial Ethernet interface. “While just about all device vendors in 2022 offer devices with both fieldbus and industrial Ethernet interface options, some still only have fieldbus or analog communications,” observes Bowne. Here, users wanting to connect these devices to Ethernet networks will need to deploy gateways to translate the data.

PI has taken this a step further with a proxy concept. “Proxies are like gateways in that they connect disparate networks,” explains Bowne. “But unlike gateways, the data mapping is defined in a specification.” Because the data are translated according to the proxy specification, the data always look the same, even if they are coming into Profinet from Profibus or some other legacy fieldbus. This concept permits both migrating to Profinet in a piecemeal fashion and installing a new Profinet network without losing access to data from legacy systems.

The second use case for continuing to install fieldbus or 4-20mA occurs in the process automation market when the application requires intrinsic safety. Here, a fieldbus usually remains the preferred solution. As Ethernet-APL becomes more widely available, however, Bowne expects it to slowly replace fieldbuses in such cases.