Shell Gives Its Remote Workers a Heads Up

The oil major is rolling out RealWear head-mounted displays to dozens of operational sites around the world to provide remote assistance for its field workers in hazardous areas. 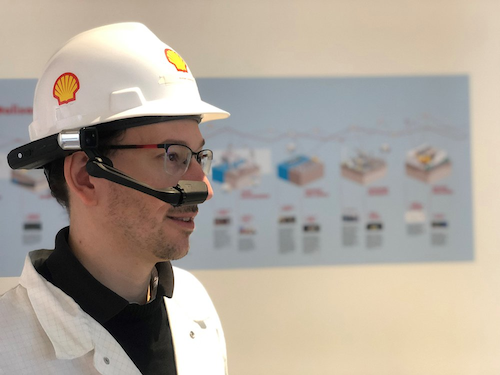 This story originally appeared on April 4. To read more about how wearable devices from RealWear, Honeywell and other companies are bringing virtual and augmented reality to field service, training and more, read a feature from this month's Automation World print issue, "Hardened Wearables Bring Help Into the Field."

When Honeywell rolled out its Intelligent Wearables at last year’s Offshore Technology Conference (OTC), a key factor that made the technology so applicable to hazardous industries like oil and gas was the hardware platform from RealWear. The hands-free, head-mounted HMT-1Z1 platform is the first commercially available device that can be used by field workers in highly restricted ATEX Zone 1 C1/D1 zones where potentially explosive gases are present.

Shell is one oil major that has made it clear how much it values digital transformation of its operations. In a continued move toward embracing digital technologies, Shell has selected the RealWear HMT-1Z1 platform to improve productivity and safety at many of its sites. The devices are being deployed through Honeywell at 24 operational sites in 12 countries, including the U.S., China, Russia, India, Germany and Austria.

The RealWear HMT-1Z1 is an intrinsically safe voice-controlled device with a micro-display that shows an image to a user as if they were viewing a 7-inch screen. Shell is currently using the head-mounted computer for remote assistance—enabling a maintenance worker, for example, to get real-time assistance via a video call. The expert on the other end of the call can essentially see through the eyes of the onsite worker and offer over-the-shoulder assistance. In one example, an expert uses augmented reality (AR) to remotely create a drawing that is visualized on the worker’s head-mounted screen.

“A new era of computing has arrived,” said Michael Kaldenbach, Shell’s digital realities lead. “Just as laptops and mobile phones are standard for desk workers, voice command and augmented reality for wearable computers will become commonplace for field staff in our industry, driving safety and productivity.”

Shell has field tested and deployed 40 RealWear HMT-1Z1 devices in multiple countries and under different conditions and is now looking to roll the devices out further.

Shell is an early adopter of AR and virtual reality (VR) systems for plants and workers. The move to wearables and mixed reality is part of Shell’s broader digital transformation.

“We are thrilled to be working with Shell and Honeywell on this historic connected field worker program,” said Andy Lowery, co-founder and CEO of RealWear. “It is the people in the field who are at the heart of every company. This vote of confidence by Shell marks a turning point for the 2.7 billion deskless workers globally who increasingly require the same connectivity as those who sit behind a desk.”