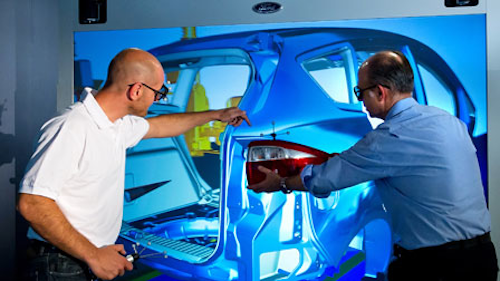 As this evolution from CAD to digital manufacturing has been ongoing, a somewhat related technology — virtual reality — has also been gaining ground in manufacturing. Some of the more prominent applications have been for training purposes in the process industries. Links to two articles with more information on this topic can be found at the end of this article.

Now, Ford has revealed that it is using virtual reality at the company’s Valencia Assembly plant in Spain to develop new methods of cost savings. In essence, what Ford is doing is akin to taking the digital manufacturing idea into the virtual reality realm.

Using a design-oriented software and hardware package from German virtual reality specialists ICIDO, engineers at the Ford Valencia plant discovered that the technology was not only capable of rendering an exact 3D virtual copy of the Ford vehicles produced in their plant, allowing for dynamic manipulation and visualization of products and parts from all angles, but that it also allowed for an exact rendition of production processes as well. See video below of Ford using the virtual reality technology described in this article.

Virtual reality technology is being tested at the Ford Valencia facility to increase overall quality and reduce the physical stress of assembly line jobs, as personnel have found it useful in determining the best installation process of a component on the assembly line. By using this virtual reality approach in advance of actual implementation, Ford claims the benefits include fewer injuries, lower cost of tooling changes, higher quality and a faster time to market.

“We started with part assembly package issues and then grew into vehicle operations as soon as I found we could apply virtual simulations to such fields as ergonomics, plant layout, and facilities,” says José Terrades, Almussafes plant simulations engineer, Ford of Spain. “Our aim is to save costs by avoiding expensive prototypes and achieve design goals in time. It [virtual reality technology] also allows us to visualize quickly what we had in mind and check if the idea is feasible or not.”