Stop Counterfeiting Straight From the Farm

TruTag’s optical microtag authentication technology will soon be utilized to protect China’s livestock in the supply chain, beginning with pigs. 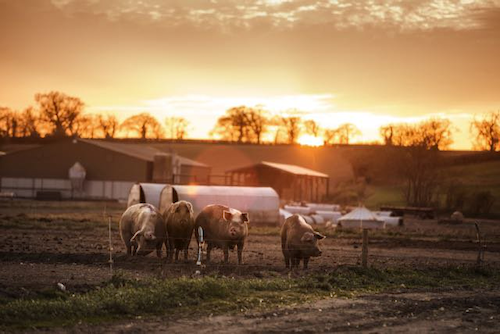 Stop Counterfeiting Straight From the Farm

First, there was the “connected cow,” a term used by Fujitsu to describe its cattle breeding support service that leverages the Internet of Things (IoT), Big Data and the cloud to monitor female cow behavior. The goal is to understand when the animal is ready to breed, thereby increasing the cow population for meat and dairy farmers.

Now, there’s the “secure swine,” a term that I just made up to describe a new use of microtags to authenticate livestock during meat packaging.

As Automation World reported late last year in the feature story Taking a Bite Out of Crime, TruTag Technologies offers “edible memory” in the form of tiny microscopic particles made of silicon dioxide, also called silica. Silica is a compound that is edible and resistant to high temperatures. In a pharmaceutical plant, the company’s microtags could be etched onto the individual pill as an optical signature that can be mixed into a coating or polymer. That means not just every bottle, but every pill can be tagged with authentication technology as an anti-counterfeiting measure across the supply chain.

Now, in a real world example of an edible barcode for food, TruTag has entered into a Memorandum of Understanding to establish a strategic partnership with Hongyang Biotechnology Co., Ltd, an animal health management and farm management provider in the livestock sector in China.

In this latest development, the partnership will seek to implement TruTag’s security platform across Hongyang’s growing livestock portfolio of 1,500 farms throughout China. The cooperation will initially target the pig industry with the potential to expand into other livestock categories. Areas of specific focus will include the direct marking and authentication of livestock and meat packaging.

This is a unique opportunity to safeguard the pig supply chain with advanced security technology, business intelligence and the ability to take corrective action to enforce authenticity. More importantly, this will protect consumers.

Just a few years ago, The New York Times reported that China’s Ministry of Public Security announced that the police had caught a gang of traders in eastern China who bought rat, fox and mink and sold it as mutton. It’s an international problem. Just last year, Fortune magazine reported that INTERPOL seized about 11,000 tons of counterfeit food as part of a joint effort with Europol, seizing monkey meat, illegal beef, buffalo meat, tilapia “unfit for human consumption,” sugar contaminated with fertilizer, as well as fake alcohol.

Here in the U.S., where manufacturers are under pressure to comply with the Food Safety Modernization Act, this technology could help secure the supply chain from farm-to-fork—for any form of meat, fruit or vegetables.

TruTag officials were unavailable to comment on whether this technology will penetrate the U.S. market in the near future, but in a statement TruTag CEO Michael Bartholomeusz commented on the recent news: “We are thrilled to have formed this partnership with Hongyang,” he said. “By combining TruTag’s products with Hongyang’s deep sectoral expertise, together we can offer a holistic solution that provides best in class supply chain security.”

Conveyor technology is no longer just about moving goods and components back and forth. Automation advances are transforming it into a core aspect of production strategy.
David Miller
Jun 11th, 2020

The pandemic put a spotlight on numerous manufacturing supply chain issues. The good news is that many of these supply chain insight problems can be addressed with existing automation technologies when aligned with the proper key performance indicators.
David Greenfield
Apr 23rd, 2020

The Potential of ERP Amid a Pandemic

Automation on the plant floor can keep production flowing to refill store shelves. But the biggest problem manufacturers face right now is a disruption to the supply chain.
Stephanie Neil
Mar 26th, 2020

When to Drop a Product

After spending time and effort building a product, it's hard to see when the time has come to drop it. But it you pay attention to the signs shown here, you'll know when the product's time has come.
Larry White
Mar 7th, 2020

Agile in a System Integrator World

From project development to general productivity, having an agile system in a systems integrator world is extremely beneficial. Jeff Miller lays out how your company can benefit from an Agile project delivery methodology.
Jeff Miller
Nov 4th, 2019

As the first food company to use the SAP Cloud Platform with blockchain-as-a-service, Bumble Bee can provide visibility throughout the supply chain by following the fish from the ocean to your table.
Stephanie Neil
May 28th, 2019

Blockchain and the Making of Machine-as-a-Service

Walmart Gets Bold About Blockchain

The retailer is mandating some suppliers onboard to IBM’s Food Trust platform as the need for fast and transparent traceability across the supply chain increases.
Stephanie Neil
Jan 31st, 2019

Quality Packaging Specialists International and Supply Chain Wizard are teaming up to build digital factory and distribution competency models for the pharma and CPG industries.
Stephanie Neil
May 14th, 2018

Is Blockchain a One-Trick Pony?

Despite an array of applications for blockchain, the technology is fighting some headwinds from knowledgeable naysayers. Is it just an overhyped tool for cryptocurrencies, or does it hold critical answers for industry’s supply chain and cybersecurity issues?
David Greenfield
Feb 22nd, 2018

Despite early confusion about the technology, suppliers are developing network frameworks and apps that will make blockchain an essential part of food and pharma industries.
Stephanie Neil
Oct 24th, 2017

Is Blockchain Coming to Manufacturing?

Wipro launches a number of blockchain-based offerings, four of which are directed at manufacturing to improve process efficiencies and reduce costs.
David Greenfield
Jun 26th, 2017

A chain is only as strong as its weakest link. This is becoming clear to the pharmaceutical industry as it struggles to comply with FDA regulations that will require the electronic exchange of serialization data.
Stephanie Neil
Apr 13th, 2017

Serialization Lessons from a CMO

PACK EXPO East: Patheon, which has invested a lot of time and energy designing and building out serialization on pharmaceutical packaging lines, has learned a lot from the experience. Here’s what you need to know.
Stephanie Neil
Mar 1st, 2017

The industry is asking how to share serialization information between supply chain partners. Blockchain’s distributed record-keeping technology could be the answer.
Stephanie Neil
Jan 26th, 2017

IT and Operations Disparities

If 2015 was a year of study and analysis, then 2016 should be a year of testing and implementation. The exercise to define objectives is done, now begins the daily activity and effort to realize them.
Luigi De Bernardini
Jan 12th, 2016

Having a specific, goal-oriented strategy in place is critical to breaking the paralysis-by-analysis stranglehold on your company’s automation technology mindset.
David Greenfield
Nov 12th, 2015

In-car technologies, vehicle customization, and the arrival of electric and autonomous vehicles all add to the complexity of automotive manufacturing. Improving the visibility and flexibility of the manufacturing and supply chain network will help.
Andy Howard
Sep 11th, 2015